Acne scars are formed during the healing process of the injuries, burns or bruises that were caused by pimples or acne. While most forms of acne heal without leaving scars, the more severe cases of acne can leave pits, scars or even uneven skin. Pimples can appear anywhere there are pores but they typically appear on the face. With most pimples showing up on the face, the scars and pits from the acne look unsightly. Some people choose to cope with these scars through the application of makeup, which then gives an illusion of clear skin. The alternative to that is finding a cure among the many treatments that guarantee permanent results.

There are many treatments available for different types of acne scars but there are two main categories; hypertrophic and atrophic. Atrophic scars are scars that are formed due to tissue loss. Hypertrophic scars happen due to an excess of tissue formation. Under these categories come a variety of scars and with that list come to a solution to each scar type. 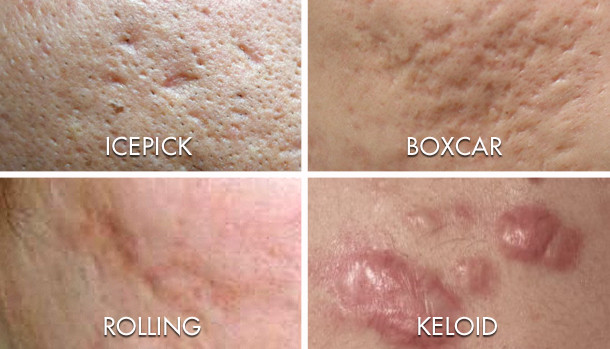 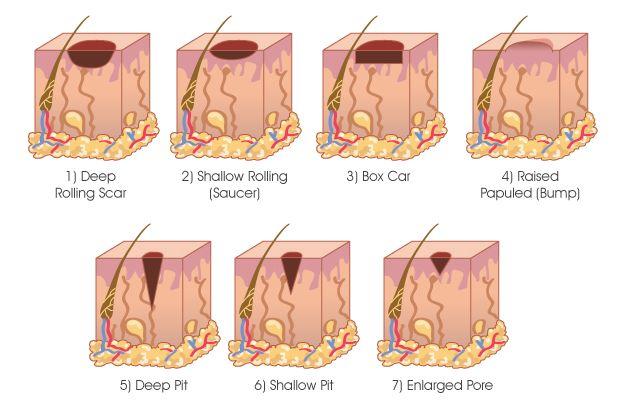 These scars are narrow, deep and typically extend into the dermis layer of the skin. It got its name from the appearance that it has; as if the skin was pricked with a sharp instrument or an ice pick. The scars vary in appearance, from a big open pore to a small yet deep hole in the skin. These typically develop after an infection that was caused by a deep inflammation on the skin surface, like a cyst. A deep scar is formed when the skin tissues are destroyed. Ice pick scars are treated with punch grafting or punch exercising.

These scars are usually larger than any others in the category. They can be identified by its sharp and steep edges and could also be an evolved ice pick scar. These scars are typically caused by cystic or nodular acne.

These types of acne scars are oval-shaped depressions that can have a steep vertical side. They are wider than ice pick scars and give the skin a pitted appearance on the surface. These depressions are caused during the period of inflammation when collagen is destroyed and tissue is lost. The severity of tissue loss may cause either a severe or superficial boxcar scar. These scars can be treated by elevation, punch excision, dermal fillers or laser resurfacing,

These scars create rolling indentations on the skin surface. They are formed when a band of tissue is formed between the subcutaneous tissues and skin. These bands pull on the epidermis and bind it to the structures that lay deep in the skin. It is this pull that automatically creates the rolling appearance. The method used to treat these scars is the submission method.

These scars are soft and small on the face but large when found on the body. The scar may have a wrinkled base at times and appears blue due to the blood vessels under it. The colour will change over time to an ivory white, turning less visible.

These scars have the scientific name of perifollicular elastolysis and are typically found on the chest or back. They have the appearance of a white head that never fully developed. Unfortunately, these scars may take months or years to disappear.

Also known as hypertrophic scars, these look like firm and raised masses of tissue. They are caused by acne found on one’s’ torso. The size of these scars is usually bigger than the actual wound. They aren’t caused by any tissue loss, but by the overproduction of collagen and an excess in tissue formation. The cures for these scars include tapes, interferon injections and steroidal cream. These flatten and shrink the scar tissue.

While there is a variety of types of acne scars treatments available, there is no hard and fast solution that can cure everything. Different scars require different treatments and the success of the treatments vary from person to person, due to their distinct individual skin type. There are two ways to decide which treatment to pursue; individual research or a consultation with a skin doctor.  Research would be able to give you a general idea of the procedures available while a doctor would be able to analyse your skin and prescribe a procedure that will present results.